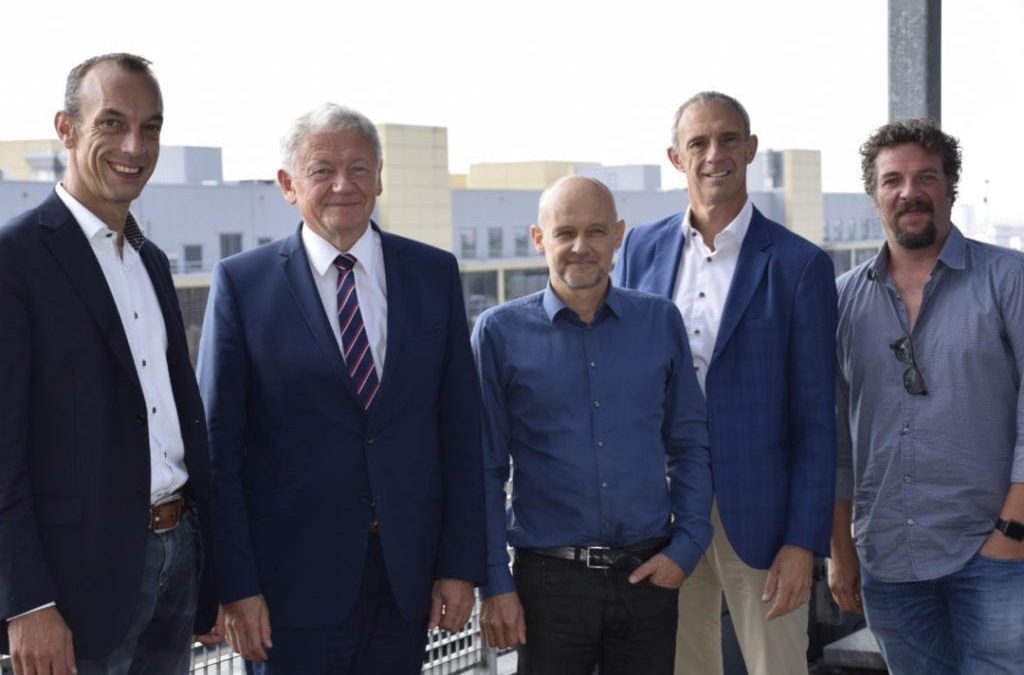 The drone economy should be able to develop more over the next few years and receive every opportunity to do so.

On August 24th, 2017, a EUKA delegation visited the Cabinet of Belgian Federal Minister of Mobility, François Bellot. On the agenda was the presentation of the drone cluster and DronePort, as well as discussing the main concerns different industry braches have regarding drone-legislation. It was an open dialogue in which the Flemish drone cluster EUKA and the minister agreed to work together in the future.

Mark Vanlook, president of EUKA, introduced the Minister to EUKA: a Flemish drone cluster, recognized by the Flemish government and Europe. EUKA connects companies, pilots, governments, schools and knowledge institutions, and is thus an important network for the drone community. In this context, the Minister asked EUKA to participate in a workgroup as representative of the drone industry to help create a new drone legislation. This legislation should enable innovation and new business opportunities for this emerging market.

“A drone can be programmed to follow a pre-defined path through GPS-coordinates accompanied by geofencing if needed. There is no safety risk there.”  – Danny Vandormael, ceo Seris Group

Danny Vandormael, ceo of the Seris Group and board member of the trade federation of surveillance companies made this immediately tangible to the Minister by explaining where current legislation is holding his sector back: “We are especially concerned with the general line of sight obligation. There are several drone applications, not only in the surveillance industry, that can operate without the need of a pilot who keeps a permanent visual contact with the drone. A drone can be programmed to execute a predetermined flight path through GPS-coordinates, possibly with geofencing, without any security risks.”

Minister Bellot was very aware of this limitation, which, for example, is also a factor in construction and agriculture, and he realizes that there must be a platform for such applications in the upcoming European directives, which in many cases, do not involve any security risks. EUKA committed itself, at the Minister’s request, to join a working group that will focus on the translation of European directives into Belgian legislation. For this purpose, EUKA will draw up a document containing the most important sectoral needs (construction, agriculture, surveillance and security, media, logistics and transport, public services and education). As this will be voiced by the companies and federations of these sectors within EUKA, Minister Bellot was very enthusiastic about such a document. EUKA will be able to contribute to legislation that will give the new drone economy all opportunities it so desperately needs.

Guy Verhoeven, manager of drone company Skycan and representative of hundreds of pilots in Flanders, discussed the difficult situation in which many drone pilots have to operate: “Pilots are experiencing a lot of effort to accommodate special flight requests in a flexible way. Pilots who strictly obey the legislation often have ‘their wings cut’ by pilots willing to carry out illegal flights. The main problems are: long administrative waiting times, a lot of paperwork, etc.”

“Pilots who strictly obey the legislation today are often thwarted by pilots willing to carry out illegal flights.” – Guy Verhoeven

The Minister reassured the pilots: Eight new people will be recruited in the Belgian Air Transport Agency at the beginning of next year, which should significantly shorten the lead time of flight applications. In addition, this agency is also busy to digitize the applications. Currently, this is in the phase of writing out the requirements of such a software. EUKA will be given the opportunity have a say in what is needed by the different industries.

“The government makes too little effort to point out that a test sote like DronePort exists. This causes companies to go abroad to test their drones, which is not the intention, I suppose.” – Peter Dedrij, manager DronePort

Peter Dedrij, DronePort’s manager, emphasized the importance of a test site like DronePort in the heart of Europe and on Belgian soil. But he also asks for a better legislation: “Even on a designated test site like DronePort in Sint-Truiden, exceptions have to be requested for flights that are not allowed in legislation. Because nearly every flight on DronePort is a legislative exception, this can quickly undermine the added value of the site. Fortunately, this is an airport and a military airspace and no other air traffic needs to be taken into account. In addition, the government doesn’t refer enough companies to this site, unique in Europe, which makes companies sometimes go abroad for test flights, which cannot be the intention.”

Minister Bellot was very impressed and acknowledged that the new legislation needs to release a test site like DronePort from unnecessary applications in order to get innovations tested in a flexible manner.

“Minister Bellot acknowledges the importance of this new and highly-expanding industry and he is prepared to give EUKA’s drone cluster a voice at a federal level.” – Mark Vanlook, EUKA Chairman

EUKA President Mark Vanlook was pleased with this productive meeting with Minister Bellot: “I think it’s important that we have been able to put our Flemish stakeholders and their issues in the drone industry into the spotlight. Now we have to translate this into concrete actions. We are grateful to the minister that he recognizes and acknowledges the importance of this new and fast-growing industry and that he gives it a voice on a federal level through the EUKA drone cluster. ”

This website uses cookies to improve your experience while you navigate through the website. Out of these, the cookies that are categorized as necessary are stored on your browser as they are essential for the working of basic functionalities of the website. We also use third-party cookies that help us analyze and understand how you use this website. These cookies will be stored in your browser only with your consent. You also have the option to opt-out of these cookies. But opting out of some of these cookies may affect your browsing experience.
Necessary Altijd ingeschakeld
Necessary cookies are absolutely essential for the website to function properly. These cookies ensure basic functionalities and security features of the website, anonymously.
Functional
Functional cookies help to perform certain functionalities like sharing the content of the website on social media platforms, collect feedbacks, and other third-party features.
Performance
Performance cookies are used to understand and analyze the key performance indexes of the website which helps in delivering a better user experience for the visitors.
Analytics
Analytical cookies are used to understand how visitors interact with the website. These cookies help provide information on metrics the number of visitors, bounce rate, traffic source, etc.
Advertisement
Advertisement cookies are used to provide visitors with relevant ads and marketing campaigns. These cookies track visitors across websites and collect information to provide customized ads.
Others
Other uncategorized cookies are those that are being analyzed and have not been classified into a category as yet.
OPSLAAN & ACCEPTEREN